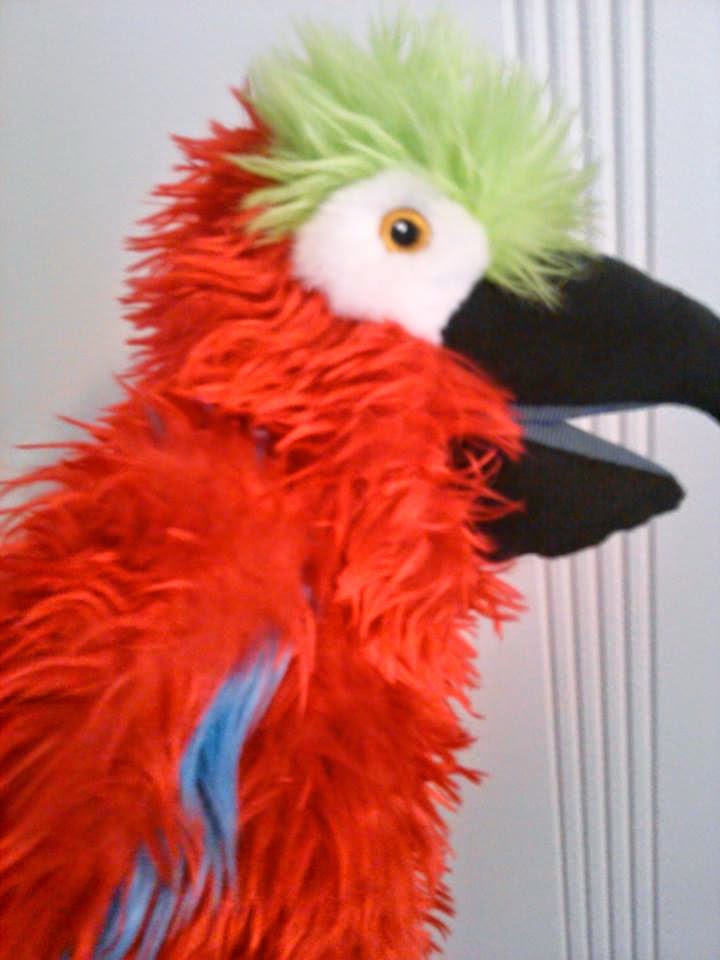 I enjoy teaching fingerplays and rhymes to my preschool music classes. They are perfect for developing a sense of rhythm, coordination, and vocabulary, and most importantly, the children love them! If they are having an off-day, and do not feel like singing or playing instruments, this is a great way to engage them again.


The parrot puppet pictured above was a recent purchase, and I have used it with a few songs in class already. I decided to look for a parrot themed rhyme and found this one written by a "Mr. I":


Five big parrots perched on a tree (puppet perched on arm)
Flapping their wings happily. (flap arms)
One saw a jaguar on the forest floor. (creep hand on the floor)
It flew away, (flap arms)
And then there were four. (let students give number and hold up fingers)

Four big parrots perched on a tree,
Flapping their wings happily,
One saw the jaguar climbing up the tree.
So, it flew away.
And then there were three.

Three big parrots perched on a tree,
Flapping their wings happily.
The jaguar kept creeping the the under-story, too.
One parrot flew away.
And then there were two.

Two big parrots perched on a tree,
Flapping their wings happily.
The jaguar reached the canopy, up close to the sun.
One parrot flew away.
And then there was one.

One big parrot perched on a tree,
Flapping its wings up in the canopy.
The jaguar leaped through the air with a great, big pounce.
But the parrot flew away. I wonder? Do jaguars bounce?

I also used the parrot puppet with this fun fingerplay, skillfully demonstrated here:

I demonstrated this finerplay for the class and then gave each student a chance to hold the puppet and say and act out the rhyme with me. The preschool classes are small, so it worked out well. They all liked this rhyme so much that the students watched attentively while each one had their turn with the puppet.
Posted by Woods Piano Studio at 11:25 AM